Turn-based combat against the AI or in cross-platform multiplayer matches. 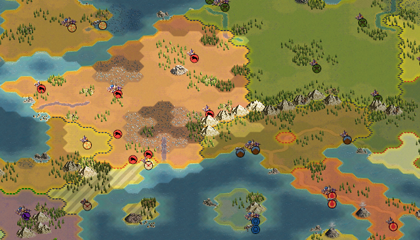 Command your armies throughout time from ancient to modern times.

Diplomacy, economy and population management with hundreds of factions.

Demise of Nations is a 4X turn-based grand strategy wargame covering the rise of Rome till the fall of modern civilization. Command your armies in one of the many ancient and modern countries including the Roman Empire, British Islands, Germany, Japan or the United States. From Rome to modern nations, you create your own warring experience. Wage colossal wars solo, against the AI, or take on your gaming friends in cross-platform multiplayer games. Form alliances and fight co-op style with the AI and other players for ultimate victory.

As opposed to other turn-based strategy game, Demise of Nations tries to focus on both, a fun single player and a thrilling multiplayer experience. The game strives to be easy to learn with a streamlined user interface. Single player comes with skirmish matches against the AI as well as a hotseat functionality for local play. Multiplayer can be played cross-platform and includes a ranking and rating system.

Download...
As far as the game is concerned... "accidentally" logged almost 8 hours of playing time today, and had a blast! Alan Paulsen